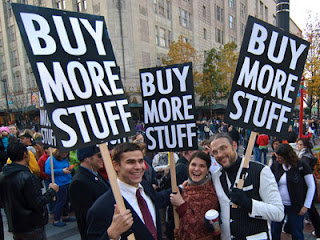 Groupthink is a psychological phenomenon that occurs within groups of people. It is the mode of thinking that happens when the desire for harmony in a decision-making group overrides a realistic appraisal of alternatives. Group members try to minimize conflict and reach a consensus decision without critical evaluation of alternative ideas or viewpoints

The primary socially negative cost of groupthink is the loss of individual creativity, uniqueness, and independent thinking....

ThanksgivingGOBlackFridayBUYCyberMondaySOMETHINGChristmas
Yesterday, I had to ask my half wife if  I was a "kill joy bah humbug" because I was so annoyed with all the Thanksgiving and Black Friday commercials. I purposely didn't send out any mass text messages or do any cheesy Facebook or Twitter posts about Thanksgiving. Well, baring the post about my half-wife's food but that was more of me supporting her business than getting eaten up by the capitalist groupthink that is the holiday season. I have to admit, I am so annoyed with it. We live in a world of mindless followers and if you are not diligent..you too will become one of them.  During the holidays it's so much easier to see this because the brainwashing is not only all encompassing- it's deliberate. As soon as the first leaf turns from green to red, the little brown turkeys starting going up, then comes the Christmas music, and the constant commercials entreating you to buy something....anything.  What's even more annoying is that during the holidays we all seem to magically remember that we have a family and all of the sudden---we want to be thankful for them. Or we realize that *gasp* people are poor and hungry and we need to feed them.  After all, people aren't poor or lonely any other time of the year.
As a free-thinking person I resent the attack on my psyche and my pocket.  I resent that the capitalists of the world don't think I am smart enough to know whether I need a new flat screen, gaming system,  thermal slippers or whatever other completely arbitrary gadget Target is selling. Do you know that across the country crime rates skyrocket over the holidays because people are willing to steal...to give. People go into debt trying to buy Christmas gifts for the same kids that they didn't have time to help with their school work all year. Others ruin their bodies shoveling unhealthy low vibration food in their mouths under the guise of celebration. Nothing about any of that seems healthy or happy....although it seems normal.  I was reading today that the term Black Friday was once thought to refer to the accounting term "in the black," meaning that on this day companies were able to switch from losing money to making money. So in truth, Black Friday, like most other American holidays is about finance not family.

Do we think buying things will make us happy. Or that buying things will make our loved one's happy. Do we think happy is for sale at all?
I also resent the poverty peddlers of the world who don't think I am conscious enough to know that hunger and loneliness knows no season.  Did you know that shelters and soup kitchens who have had both a budgetary and a volunteer deficit all year, oftentimes  turn volunteers away during the holidays. Why? Because people flood these organizations on Thanksgiving and Christmas but leave them vacant and underfunded for the remainder of the year. I guess its sucks particularly bad to be homeless and hungry on Thanksgiving...I guess on other days it's easier???!!! Yep..that makes a lot of sense! I don't know about you, but the people and causes that hold the most value to me know no time, no price, and have no season.
It's so unfortunate, but we have become a culture of fans of followers. So much so that now some people actually define themselves based on who they follow (think Justin Bieber's "beliebers" or B. Scott's "Love Muffins").  I did  a post some time ago called fans vs. fireworks, where I grappled with my own belief system on the subject, but even doing that and taking great care to distinguish supporters of this community as members and not followers,  I am still amazed at how easily we all succumb to the relentless pressure to follow. To be fair, I should say that I don't take issue with people supporting the people and causes that they/we believe in.  What pains me is how so many of us have no clue what we like because we are so busy waiting for someone else to tell us. Only when someone else tells us that something is popular does it become important. I sometimes feel that the independent thinker is an endangered species....it's like we won't get a clue...until they sell it at Wal-mart.

So, this season I challenge you to give yourself the gift of discernment. Be radical. Stop and think for yourself. Stop letting everybody else tell you what you want...want you need...when and how to celebrate...how to be thankful...who to be thankful for ...and when. Support breast cancer in September, go to a soup kitchen in July, thank your loved ones in October (shameless plug).

Because at the risk of sounding cliche', every minute that you have with your friends and family is a gift. And in times of hardship your digital camera won't feed or clothe you.  Everyday is a HOLYday and lucky for us....it's free.
Posted by Kenya at 9:20 AM